by: Saul Elbein, The Hill via Nexstar Media Wire

The American West is experiencing its driest period in human history, a megadrought that threatens health, agriculture and entire ways of life. DRIED UP is examining the dire effects of the drought on the states most affected — as well as the solutions Americans are embracing.

AUSTIN, Texas — The megadrought in the Western U.S., the region’s worst in 1,200 years, is threatening America’s cattle heartland: withering pastures, wrecking feed harvests and endangering a quintessential way of life.

The drought is forcing ranchers here in Texas and across the Southern plains to make an agonizing decision: Sell early now for less money than they planned on — or hold on, pray for rain and risk losing everything.

For now, Ferguson is just selling his oldest calves, for which he’ll be able to get the best price. But with no rain in the forecast, and therefore no prospect of lush winter pastures for his herds to eat, “it won’t be long before we start getting into the younger ones.”

The drought is echoing through beef supply chains, resulting in higher prices for consumers for at least the next two years — and likely serving as the final blow to many small, family-run cattle herds that represent a key part of the industry.

“The lack of water in general, it’s hurting us all the way around. Any way you can think of,” cattle buyer Josh Sturgeon told KAMR, which is owned by The Hill’s parent company, Nexstar Media.

Sturgeon had come to auction in search of deals from ranchers such as Ferguson, forced to liquidate their herds for lack of water to grow cattle feeds — or the money to buy them.

But “you’re almost afraid to buy,” Sturgeon said. “Cattle drink a lot of water, especially this time of year. With this drought, they’re drinking a lot of water. Cattle are dying because of this. Even the best of cattle are struggling.”

The sudden bump in sales as the drought worsens are “intense, protracted — it’s nothing like we’ve seen in the last 15 years,” Walter Kunisch of consultant group Hilltop Securities told The Hill, adding that many farmers are even selling off their breeding stock, which they rely on to produce the next generation of cows.

“That’s a big signal to me that, you know, that future supplies at some point are going to run tight,” Kunsich added.

More than 80 percent of the West is in severe drought this year, according to the National Drought Monitor — up from just 20 percent last year. According to a survey by the U.S. Farm Bureau, more than three-quarters of farmers in drought-stricken states have pulled farmland out of production, and 85 percent of ranchers reported selling off some portions of their herds.

The U.S. Department of Agriculture’s cattle report last month found that herds are down by 2.4 percent nationwide since last year. That’s a decrease of 750,000 cows, and a fall of 2 million since the national herd peaked in 2018 — just before the drought began to worsen across much of the West.

Over the last two weeks of July, the national cattle sale rate also jumped to 120 percent above 2021 levels — an average that reporting by The Hill and KAMR suggested conceals even higher frenzies of sales in some markets.

The sales are playing out against the background of declining rains and falling levels of underground water in the massive Ogallala Aquifer, which stretches beneath much of the Great Plains and which the regions’ vast agricultural footprint — much of it devoted to protein-rich feeds for cattle — is steadily and irrevocably soaking up.

Cattle’s role in the situation is complex: They are also a substantial global contributor to climate change, which means they are playing some role in worsening the drought that is killing their own feed crops.

Beef and dairy cattle make up 62 percent — a little under two-thirds — of the 8.1 gigatons of global greenhouse gas emissions released worldwide by livestock, according to the United Nations’ Food and Agriculture Organization. With around 5 gigatons released, that makes the global cattle industry responsible for more emissions than the entire U.S., which emitted 4.8 gigatons in 2021.

The last bastion of the American cowboy

Small, family-run cattle operations are in many ways the last survivors of the vast consolidation of the American agricultural system over the last 40 years, which has driven the structure of farm ownership towards ever-larger operations producing bigger and more specialized arrays of crops.

Cow-calf producers — ranching companies such as Ferguson, which raise cattle to sell to buyers like Sturgeon, which fatten them for slaughter in feedlots — have stood as a partial exception to the sweeping vertical integration of animal protein.

Since the 1990s, chicken and pork markets have been transformed from diverse regional markets to ones dominated by a few massive corporations that control enormous flows of company-owned animals, raised on company-owned feed and antibiotics, through enormous, confined feeding operations.

Meanwhile, through a system of secret deals that many farmers complain are illegal, huge meat packers such as the Brazilian-owned JBS and Marfrig drove a similar consolidation in the feedlots where cattle were fattened for slaughter.

But because it remains very difficult to breed beef cattle in confinement, cow-calf producers — the closest thing that still exists to the classic image of the cowboy — have stood apart as a last, romantic image of both Western independence and the structure of farming as it used to be.

About 27 percent of all cattle sold in America come from herds of less than 50, run by people who use them as part of a diversified family income stream that may include other crops, contract work or a separate job in town, according to data from the Department of Agriculture.

Those small producers are “a pretty darn important part of the system of beef production, because I mean, the only way we produce 27, or last year, 28 billion pounds of beef is because we have all of these people with cows,” David Anderson, an agricultural economist at Texas A&M University’s Agrilife Extension Service told The Hill.

They are also the sector of beef producers being hit hardest by the drought, said agricultural economist Brock Thompson of Hilltop Securities.

As in previous rounds of drought, “it’s your smaller herd sizes that are having to liquidate — those ranchers who may not have family that are coming back into the business, and they’re tired of fighting the cycles, are tired of battling the regulations,” Thompson said.

“In agriculture, we’ve lost a lot of attractiveness to a younger generation to come back and take over the farm,” he added.

The ‘hollowing out of rural America’

In cow-calf states such as Texas and Missouri, those small cattle operations help support an entire ecosystem of businesses, from gate and fence installers to large animal veterinarians.

But consolidation has squeezed all this, and the drought is squeezing it even more, exacerbating the “hollowing out of rural America,” said Joe Maxwell, rancher and president of Farm Action.

“The cattle market has just really not been good for a long time,” Maxwell said. “The meat packers just control that price, and so the farmers haven’t had a lot of money in their pocket. So this drought is kind of like the final straw for a lot of them, they’re completely dispersing their herds.”

He added that the drought also gives large conglomerates such as JBS an excuse to charge higher prices — which they don’t pass on to farmers — and then use the rising prices as justification to import more beef from countries such as Brazil and Australia.

That’s something Maxwell’s allies at the United Food and Commercial Workers Union warned about earlier in the drought. The union, which includes meatpackers, is worried about any decline in domestic American beef production and the economic dislocation that ripples out from it.

Data from the last serious drought to hit Texas — between 2008 and 2011 — support their concerns. After that drought, the state herd fell from 5.1 million head to 3.9 million.

“Even after almost a decade of recovery from the drought a decade ago, we didn’t get all the cows back,” Anderson, of Texas A&M, said.

Around Maxwell’s home in Missouri, derelict feedlots and silos still sit like bleached bones on the land of the farmers who once ran small feedlot operations, where they bought and fattened up the local cattle they sold on to now-defunct regional packers.

“These communities are becoming older, and we see more and more rural hospitals closing because of the depopulation and the wealth is out, and they can’t keep the doors open,” Maxwell said. “My local hospital just closed. We’ve got to go 45 miles to go to a hospital. The pharmacist closed. The whole infrastructure of the rural community is devastated.”

Similar situations can be seen from Texas all the way to the Canadian border. 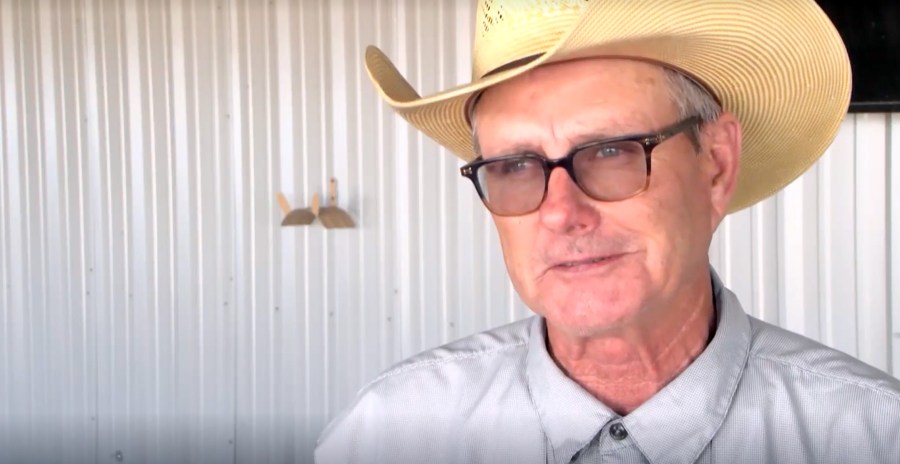 This summer, Montana rancher Gilles Stockton faced the same buy-or-sell conundrum as ranchers across the West. In a community “drying up like a tumbleweed,” Stockton had held onto his herd, gambling that the rains would come — and his bet paid off with heavy downpours in June.

But the precarity was new and alarming: If he had bet wrong, his business would have been wiped out, Stockton told The Hill. When drought returned this month, even his own irrigation setup to draw water from a nearby river didn’t make him feel confident.

He sold off 20 percent of his herd. Many ranchers he knows have gotten out of the business entirely. His neighbors aren’t talking about climate change, exactly.

“Most of them are climate change deniers. But what they do see is these big and more severe fluctuations that they can’t deny,” he said.

Stockton argued that the transformation of agriculture from relatively small, diverse and local to big, specialized and global had cut meat prices at the expense not only of rural civic health, but also of climate preparedness and resilience.

“The way to survive when your climate is glitchy and you don’t know what’s going on, and you want to keep producing food — is to be diversified.”

For ranchers, he said, that once looked like “you got cattle, everybody around here used to have sheep; you could raise a few pigs. Instead of just hay, you raised some barley to feed the pigs. You have these different options that you can jump in and out of depending on the climatic situations that you’re faced with.”

On the macro level, however, industry and regulatory pressure overwhelmingly go the opposite direction, favoring the big and specialized, Anderson said, creating a feedback loop in which farmers need ever more land to pay off the cost of ever more expensive and specialized equipment.

“And we have lost diversity and sort of the gene pool in those that might have given us more ability to be more flexible in a changing climate,” Anderson said.

Previously in this series: