DOHA, Qatar (AP) — Gio Reyna, Joe Scally, and Yusuf Musah were 11 years old the last time the United States took the field in a World Cup match. On the 3,066th day after that loss in Brazil, the Americans return to soccer’s showcase with a new-look team dreaming of lofty goals and hoping for actual ones.

Filled with novelty, nerves, and naivety, these young Americans take the field against Wales on Monday night in a match a growing fanbase back home has been pining for since 2014.

“Three years, four years of just working up to this moment, I think all the guys are ready to go,” midfielder Weston McKennie said.

President Joe Biden called players to offer encouragement ahead of the opener.

A Friday match against England follows and group play ends on Nov. 29 against Iran, which famously eliminated the U.S. from the 1998 World Cup in France. 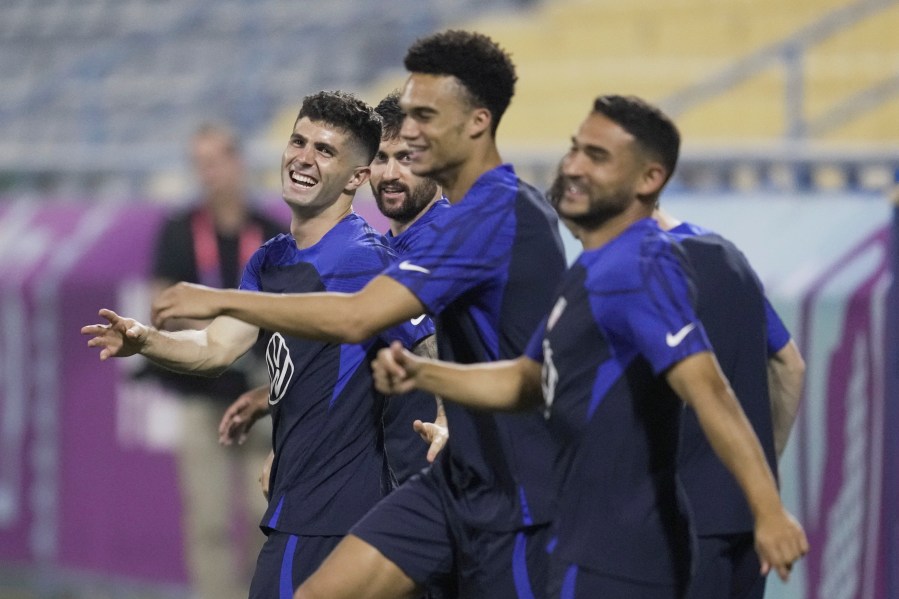 Only DeAndre Yedlin, a 29-year-old defender, remains from the American team eliminated by Belgium in the second round eight years ago. Yedlin, Christian Pulisic, Kellyn Acosta and Tim Ream are among just four holdovers from the group that flopped to the field in anguish after the crushing loss at Trinidad in CONCACAF qualifying in October 2017 that ended the streak of U.S. World Cup appearances at seven.

McKennie debuted a month later in a 1-1 friendly draw at Portugal along with Cameron Carter-Vickers and Tyler Adams, who was appointed captain Sunday at age 23.

A total of 118 players were tried over 68 matches in a World Cup cycle interrupted by a pandemic, including 91 after Gregg Berhalter was hired as coach in December 2018. He gave debuts to 56 players and took the second-youngest roster to the tournament at an average age of just over 25 years, older than only Ghana.

Some are already looking ahead four years, to when the U.S. co-hosts the tournament and the core group figures to be in its prime.

“We want to build a ton of momentum going into 2026, but it all starts now,” Berhalter said.

Berhalter becomes the first American to play and coach at a World Cup — his 50th minute shot from Claudio Reyna’s corner kick struck German defender Torsten Frings’ arm on the goal line but was not called a hand ball in 2002′s 1-0 quarterfinal loss.

“I was in my mom’s belly,” quipped Gio Reyna, Claudio’s son, who was born that November.

Berhalter has installed a high-pressing style and led the Americans to a 36-10-10 record that included titles in the 2021 CONCACAF Gold Cup and Nations League. 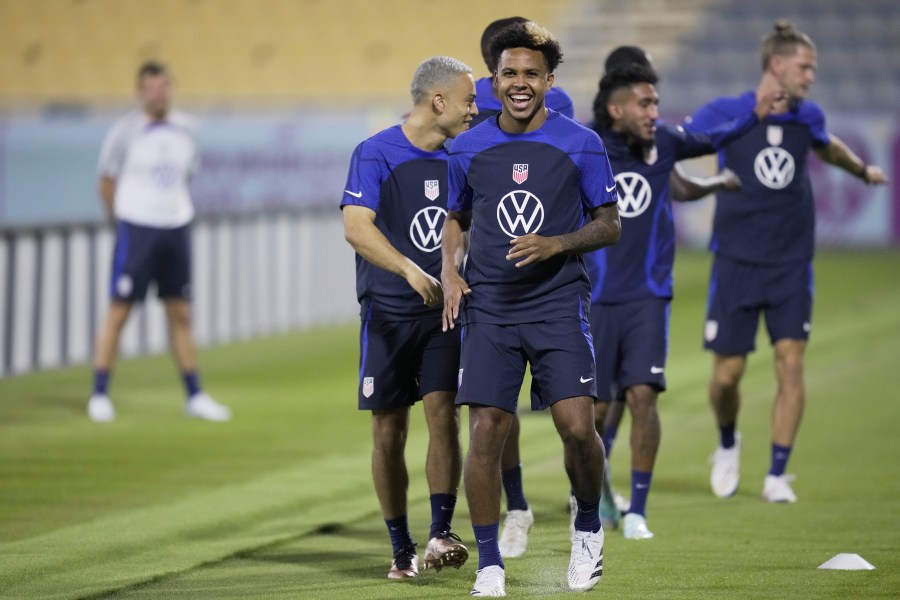 “The final determination of this group,” he said, “will be at the World Cup. That’s how generations are measured. We can all be talking — that’s great, we beat Mexico three times. Or we won the Gold Cup or the Nations League. But the real measuring stick for this group is certainly going to be how you perform in Qatar.”

Wales is back in the World Cup for the first time since 1958, led by 33-year-old Gareth Bale and 31-year-old Aaron Ramsey but without injured midfielder Joe Allen. The Dragons advanced to the 2016 European Championship semifinals before losing to eventual champion Portugal and made it to the second round of last year’s Euros before a 4-0 wipeout against Denmark. The lack of World Cup experience has the Welsh as guarded as the Americans heading into the match at Ahmad bin Ali Stadium, a renovated 44,000-seat venue west of the capital.

“They’re a good young squad and have some fantastic players,” Bale said. “We’re under no illusions that they’re here to win the game just as we are, so we know it’s going to be a difficult match tomorrow and I’m sure they know the same thing, too.”

With Miles Robinson and Chris Richards injured, the American central defense will start a pair from among Walker Zimmerman, Aaron Long, Carter-Vickers, or 35-year-old Tim Ream, back on the national team for the first time in 14 months.

“Tim’s the grandpa of the group,” Adams said.

Right back Sergiño Dest and McKennie are fit enough to play, but perhaps not enough to start. 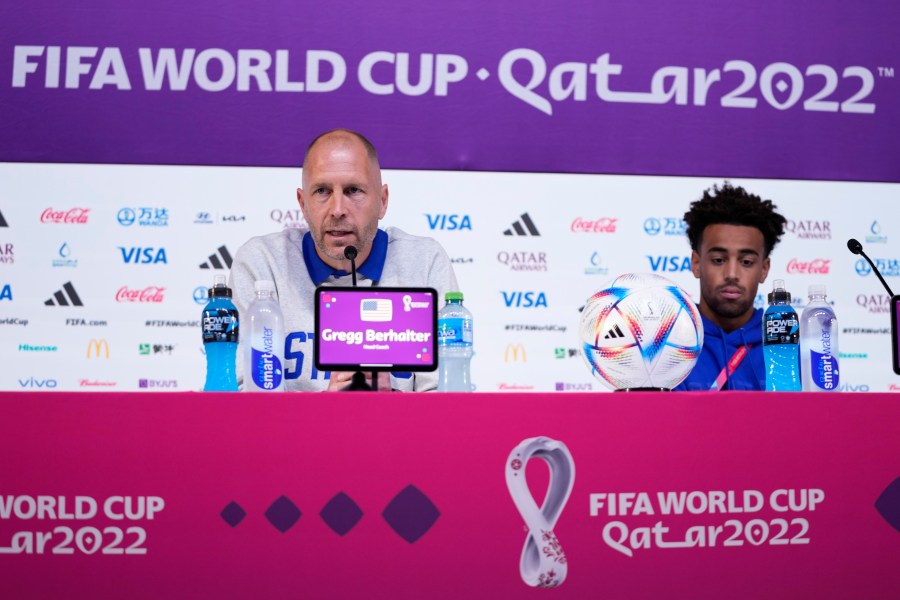 Head coach Gregg Berhalter, left, and Tyler Adams, both of the United States, attend a press conference on the eve of the group B World Cup soccer match between United States and Wales, at Ahmad bin Ali Stadium, in Doha, Qatar, Sunday, Nov. 20, 2022. (AP Photo/Ashley Landis)

Forward, a position that produced just three goals in qualifying also is uncertain for the U.S. Josh Sargent, Jesús Ferreira and Haji Wright are the choices.

Following Berhalter’s surprising decision to drop Zack Steffen, Matt Turner likely will start in goal over Ethan Horvath and Sean Johnson. Turner has been limited to four Europa League matches in his first season with Arsenal, the last Oct. 20.

“I showed the coaching staff here how much I’ve grown as a person and a player,” Turner said.

Pulisic also has struggled for playing time, getting just five starts for Chelsea this season. Dest made only two starts for AC Milan.

As the opener approached, Pulisic recalled gathering for World Cup games in the basement of his home in Hershey, Pennsylvania, and watching Landon Donovan score the injury-time goal that beat Algeria in 2010 to earn advancement.

“The family coming together, wearing all our red, white and blue, just getting excited,” Pulisic said. “It was always a dream of mine. I wanted to be there so bad. But now to be here as a part of this team actually at the World Cup, it’s special. And, yeah, I don’t want to take a moment of this for granted.”

Even though Black Friday and Cyber Monday are over, …

These 25 deals were the most shopped among BestReviews …

The best gifts for 5-year-olds

The best gifts for 10 year olds